Hynes, Collum Square Off on Redevelopment at Candidate Forum

Emily Hynes and Sheena Collum, the two candidates vying to become South Orange’s first female Village President, agreed on several of the issues at a forum hosted by the League of Women Voters Thursday night, with one significant exception — redevelopment.

Collum defended the Board of Trustees’ recent vote to declare the entire township an Area in Need of Rehabilitation, while Hynes — running on a platform focused on re-evaluating the pace and scope of redevelopment — took a strong stand against it.

The two are running for election for South Orange Village President; Election Day is Tuesday, May 12.

An audience of roughly 50 people turned out for the forum, which was held at the Baird Center and moderated by LWV member Michele Bobrow. The candidates gave prepared opening and closing statements, and responded to six pre-selected questions. They also answered questions submitted by audience members.

What do you consider to be the most important issue facing South Orange Village and how would you address it?

Hynes called the rehabilitation designation “the core issue for me in this race.” She said the unanimous decision by the Board of Trustees in March “grants them a lot of powers,” including allowing them to enter into planning agreements that permit more variances, PILOTs and abatements and circumventing the public bidding process. “It is shortsighted to say this broad sweeping resolution was just intended for the commercial areas of our town,” said Hynes, while it includes every residential property as well.

“If we want to be able to take a more measured approach, we need to scale it down and zero in on those commercial districts,” she said.

Collum said the genesis of the ordinance was to make improvements in the commercial corridors, but that also “outside of the central business district we need some improvements, and this will give short term tax abatements to for proper owners to make [those] improvements.”

“It’s just a tool, it’s a designation. You can’t do anything with that without adopting substantive plans.”

Collum said the main issue facing residents was taxes. “If you look at tax breakdown 90% of what collects is  from single family homeowners.” She said she was proud to have worked on the BOT as it delivered the two lowest tax increases in over 15 years.

She said the Village should continue looking into shared services, interlocal agreements and working with the school district to find ways to lower the tax burden, as well as to continue with economic development. 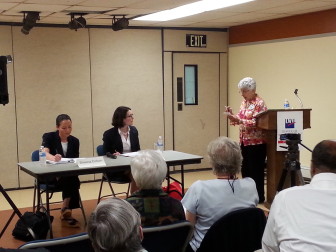 What is your plan for the South Orange Village Hall?

Collum said she initiated releasing an RFP for the sale of Village Hall. Officials are evaluating the two bids; one for a boutique hotel and the other from a “reputable restaurant group” that restores historic buildings. She said they would look at what is the best use for the land, in particular in terms of whether it would serve to better connect the east and west sides of town.

“As Village President I will always ensure board members have choices…and not feel as though we are backed into a corner,” said Collum.

“We should not be selling Village Hall,” said Hynes, calling it a central focal point of the town that is both a tangible and intangible asset. “This isn’t just because it’s pretty…or old,” she said. Maintaining a historic, walkable district in downtown has a fiscal impact on local businesses.

She also noted that the parking on the site was “invaluable,” and questioned whether another tax abatement would be granted to maintain the historic facade.

“Not every building can be preserved, but Village Hall is different. It is our town; it is the symbol of our Village.”

What would be your best-case scenario for using the former Marylawn properties?

Hynes stressed that the owners of the property need to be at the table before the town can make any decisions about what should happen to it, but that wasn’t currently happening.

She said trustees created a working group of stakeholders and looked at several different scenarios of what the community believed was the best use of the site. “It is through rehabilitation, which my opponent opposes, that we can be very specific on sensitive sites like Marylawn…” Collum said.

Collum said the point might be moot because another municipality’s Board of Education is investigating purchasing the property to create a gifted and talented school.

What steps would you propose to be sure that affordable housing is available for long-term residents, particularly our workforce and seniors?

She’d like to use some of the township’s affordable housing trust fund to build more housing for senior citizens.

Hynes turned the question around to the issue of taxes and PILOTs. “People cannot stay in their homes if they can’t afford it,” she said. She cited the 30-year PILOTs given to The Gateway and Third & Valley.

The township should “stop giving breaks to big businesses” and try to get some town-owned properties back on the tax rolls.

“A tax abatement is not just a giveaway,” said Collum. To grant a PILOT, a township has to show the project would not happen without such an abatement. They are sometimes necessary to spur economic development, she said. In the case of Third & Valley the value to the town of the project being completed “was very substantial.”

How adequately are South Orange’s social service needs being addressed, and what if any changes would you recommend?

Hynes said the town needed to find humane solutions to the homeless situation in the South Orange train station, and be careful about leaving it to the police to deal with the issue. She also said NJ Transit had to be compelled to clean and maintain the train station. “If they understand this affects their bottom line then they will sit down with us…”

Collum agreed the town should partner with social service agencies to address the homeless issue.

The first audience question was about the township’s ongoing relationship with the East Orange Water Commission. Collum noted the work done by her running mate, trustee Howard Levison, in negotiating the end of the contract with EOWC. She called it “incredible” that the EOWC was able to lie to officials and residents for so long about the presence of toxic substances in South Orange’s water, and that residents were still dealing with bills from the EOWC with questionable interest charges.

Hynes noted that the municipality would still have to maintain a relationship with EOWC even after the contract ended in 2016, because of ongoing maintenance needs.

On a question related to introducing more transparency regarding major initiatives, Collum said she thought while there was always work to do, South Orange was ahead of the curve. She wants to use electronic communications more and would like to launch a digital newsletter for residents.

Hynes questioned the practice of posting public notices in the print edition of the News Record rather than in an online forum. “We have to engage with people by reaching out to them and pulling them into the community.”

Regarding crowding on NJ Transit trains, Hynes said the township should sit down with the agency. “Let’s make them see the dollar signs when they look at South Orange.” Collum agreed, acknowledging the importance of the train station to the community as a transit-oriented village.

One question was about what kind of development the candidates would like to see going forward.

Mentioning the Third & Valley project, which was initially proposed to have fewer apartment units than the current 215, Hynes said, “I think we’ve done too much and I think…we need to scale down the size and scope of projects so that they are in keeping with the distinctive neighborhoods that we have.” She is concerned the township cannot sustain this rate of development with its existing infrastructure.

Collum pointed out that the developer Jonathan Rose made a $1.1 million contribution toward relocating the Rescue Squad and is also building over 250 public parking spaces. She also wants to see age-restricted housing, for those who are downsizing.

Both candidates agreed there were many infrastructure needs in the community, such as in the library. Collum said depending on what happens with the sale of Village Hall, town offices could move into the Connett Building and some of the money from the proceeds of the sale could be used to help renovate that building and the library.

“The village is in the driver’s seat when were are in a redevelopment zone and a rehabilitation district,” said Collum.

Also on the development front, an audience member asked what the candidates would like to see happen to Orange Lawn Tennis Club. Collum said the town was continuing to work with the club’s owners to ensure the club could be restored and that whatever is developed would be consistent with the surrounding neighborhood.

“This goes back to an issue of transparency,” said Hynes. “Having nearly 30 townhouses on four acres of sloped property…presents some very serious issues of traffic” and water infiltration. “Single family homes are appropriate for that space, not 30 condos.”

Asked about the former JAC space and whether it should remain an animal shelter, both women advocated for a Trap Neuter Release program. Collum questioned whether South Orange needed its own dedicated animal shelter or if the town could share one with another town, such as Maplewood. “There are lot of competing interests here” in terms of using the property.

In her closing statement, Hynes said South Orange needed a fresh perspective, and she would be someone who could build consensus but not vote unanimously, as she said the current BOT does. “We need a new voice that represents an alternate view.”

Collum countered, “…I think a statement like ‘all resolutions are passed unanimously’ gets likely made by somebody who hasn’t attended any committee meetings,” noting that the trustees debate and build consensus through their committee meetings and advisory boards before bringing resolutions to the full board.

“Serving this Village for the past 14 years has been one of the most rewarding experiences of my lifetime,” Collum said.