Essex County Executive Joseph N. DiVincenzo, Jr. announced the opening of a new Bald Eagle Exhibit at Essex County Turtle Back Zoo on Wednesday, March 10th. In addition, DiVincenzo welcomed Freedom, a 4-year-old Bald Eagle, to the Turtle Back animal family. Freedom was rescued from a tree in Minnesota after becoming tangled in rope and branches. 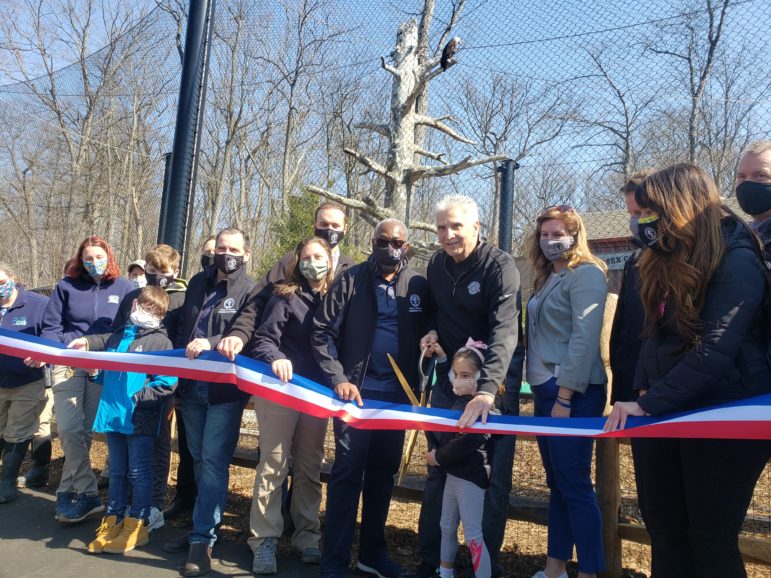 “We are pleased to open a new and improved Bald Eagle Exhibit in our Wild New Jersey area. This will enhance our visitors’ experience and provide them with a better viewing area to see the bald eagles,” DiVincenzo said. “Welcoming Freedom as the newest member of our animal family displays the important role that zoos have in conservation efforts and raising awareness about the dangers that threaten wildlife and the environment,” he added.

The engineering firm of French and Parrello from Wall received a professional services contract for $81,500 to design the new exhibit and provide inspection services during construction. ZN Construction from Saddle Brook was awarded a publicly bid contract for $1,272,000 to perform the construction work. The project was funded with a grant from the Essex County Recreation and Open Space Trust Fund.

Turtle Back is welcoming a 4-year-old eagle named Freedom to the new exhibit. Four years ago, Freedom became entangled in a rope and was discovered hanging upside down in a tree in Minnesota. He would have died if he were left hanging there. He was saved by U.S. Army veteran Jason Galvin who noticed the trapped bird while driving by. Galvin called local police and fire departments and the Minnesota Department of Natural Resources to rescue the eagle, but none were able to help because of how high up in the tree the bird was caught. With permission from the MN Department of Natural Resources, Galvin, an Army sharpshooter, used a .22 caliber rifle to shoot through the branches and ropes in which Freedom was tangled. It took 150 shots fired over the course of 90 minutes to free the bird. Freedom survived the 75-foot fall from the tree and was taken by Galvin and his wife to the University of Minnesota’s Raptor Center where he has been living and recovering for the last four years.

Freedom joins female eagle Adak, who came to Turtle Back Zoo in 1997 from the Bergen County Zoo.

Turtle Back Zoo is open seven days a week from 10 a.m. to 3:30 p.m. Tickets are $14 for adults, $12 for senior citizens over 62 and children ages 2 to 12, and free for children under 2. To promote social distancing, tickets must be purchased in advance at https://turtlebackzoo.com/admission-hours/. For more information, visit www.essexcountynj.org/turtlebackzoo or call 973-731-5800.

Essex County Turtle Back Zoo has roared back to life from the verge of closure by a previous administration. Attendance reached an all-time high of 907,522 in 2017 and the zoo has operated as a self-sustaining facility with revenue collected exceeding operating expenses. In addition, Turtle Back is accredited by American Humane, the Association of Zoos and Aquariums and the Zoological Association of American, a clear indication that an institution is committed to the highest standards in animal care, ethics, conservation and education. It also has been named the Best Zoo in New Jersey by NJ Monthly magazine four times and received a Certificate of Excellence from TripAdvisor.com three times.