More than 100 parents, guardians and children turned out for a rally in front of Maplewood Township Hall on a snowy Monday, calling for school district officials and the teachers union to forge an agreement that would allow students to resume in-person learning.

On the 100th day of school, which has been conducted mostly online since the onset of the COVID-19 pandemic that has now claimed the lives of more than 500,000 people in the United States, chants of “Open our schools!” rang out on the steps of the building that houses local municipal offices. 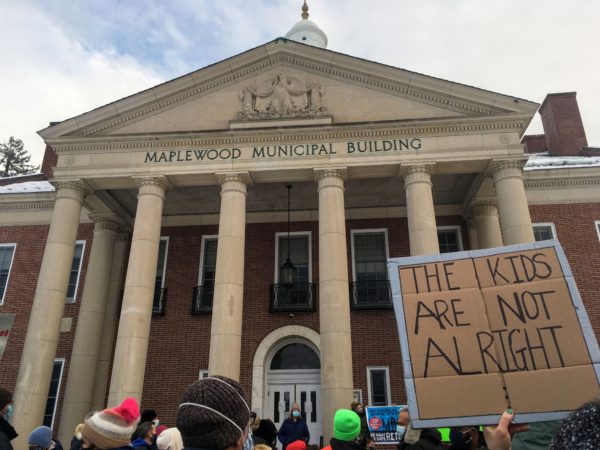 Pete, a Seth Boyden fifth-grader, was the first student to speak to the crowd gathered.

“I know what you’re thinking. What can I do about this giant war between teachers and everything?” he said, speaking to the adults via a megaphone. “I can’t do anything, but you can. We can’t accept this anymore. … I say open the freakin’ schools!”

Public schools in Maplewood and South Orange closed 11 months ago to help slow the spread of the novel coronavirus. The virus has killed more than 20,500 New Jerseyans, or one in 400 residents — the worst fatality rate of any state — up from one in 500 in December.

Speakers who addressed the crowd alternated between anger at the inability of the school district to return to in-person learning and hope that officials and the teachers union can reach a compromise over working conditions.

Jeannie Kwon, a South Orange mother of a 4-year-old and a 7-year-old, said she was “pissed” that one of her children had “no access” to their individualized education program, or IEP, “for almost a year.”

“I feel, for me, personally, that everybody is passing the buck,” she said, calling on local township and village officials to wade into the fray. “I expect [them] to make this a forefront issue.” 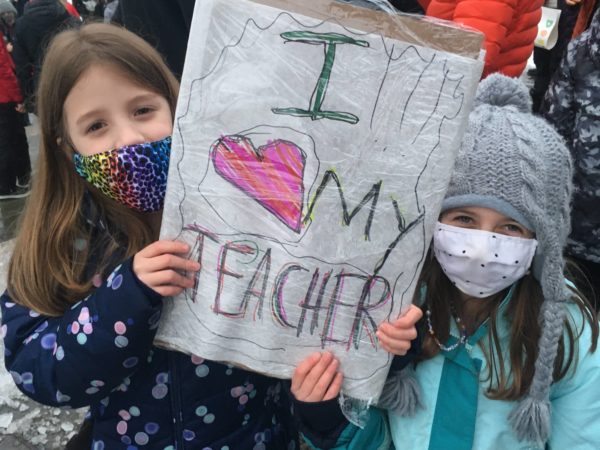 Second-graders Fiona and Callie attend the SOMA for Safe Return to School rally in front of Maplewood Municipal Building on Feb. 22, 2021. (Photo by Bruno J. Navarro)

Kwon also called out the prevalence of “misinformation.” “It’s so unclear what the facts are around our facilities,” she told the crowd.

Last week, the South Orange-Maplewood Board of Education said it was “blindsided” by the teachers union decision to shift to all-virtual instruction after what it characterized as unsafe working conditions and move to engage the school district along with a state-appointed mediator. Last fall, the school district learned that ventilation work that was supposed to have been completed, in fact, was never carried out — a revelation that led to the postponement of part-time, in-person learning.

In January, SOMSD released a report it had commissioned that found one-quarter of classroom ventilation units were inoperable or not fully functioning.

Chambers said he asked local elected officials outside the school district to support the resumption of in-person learning. “I literally begged the village trustees to just say something,” he said. “They said it’s not their job.” Chambers, with a nomination petition in hand, also told the crowd that his struggle had prompted him to run for one of three seats on the South Orange Village Board of Trustees in the May 11 election.

In Maplewood and South Orange, public schools are overseen by a nine-member Board of Education that operates independently of municipal government. The BOE sets policy and goals, and hires and oversees the superintendent, who is responsible for the management of the district.

Kelly Piccola, one of the organizers of the SOMA for Safe Return to School rally, said that she was “hopeful” that the school district and the South Orange-Maplewood Education Association, which represents approximately 650 school employees, would reach a “safe and equitable” agreement.

“We’re hopeful, but we want to keep the pressure on for them to reach a long-lasting resolution.”

Local parent Rose Sala lamented the hours-long screen time her kindergartener endures with “tantrums and frustration.” Her daughter, Fiona, 8, also attended the rally and noted that there were safety precautions in place. “So why can’t we open the school?” she said. “I wish I could see my teacher.”

Second-grade classmate Callie, 8, echoed the sentiment. “I want to go in, but not on the computer because it hurts my eyes,” she said. 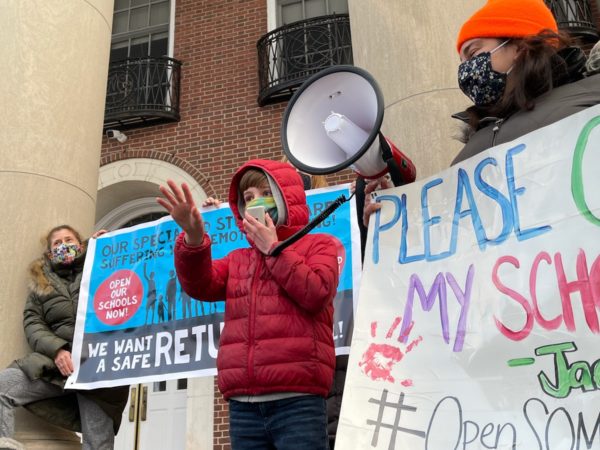 Pete, a Seth Boyden fifth-grader, was the first student to speak to the crowd gathered at the SOMA for Safe Return to School rally on Feb. 22, 2021.

Callie’s mom, Alissa O’Connor of Maplewood, said that her children have been attending the South Mountain YMCA after-school programs since July and felt safe doing so.

But she also expressed concern over when schools would reopen.

“Like many families, we don’t know what to do,” O’Connor said. “And what happens next year?” 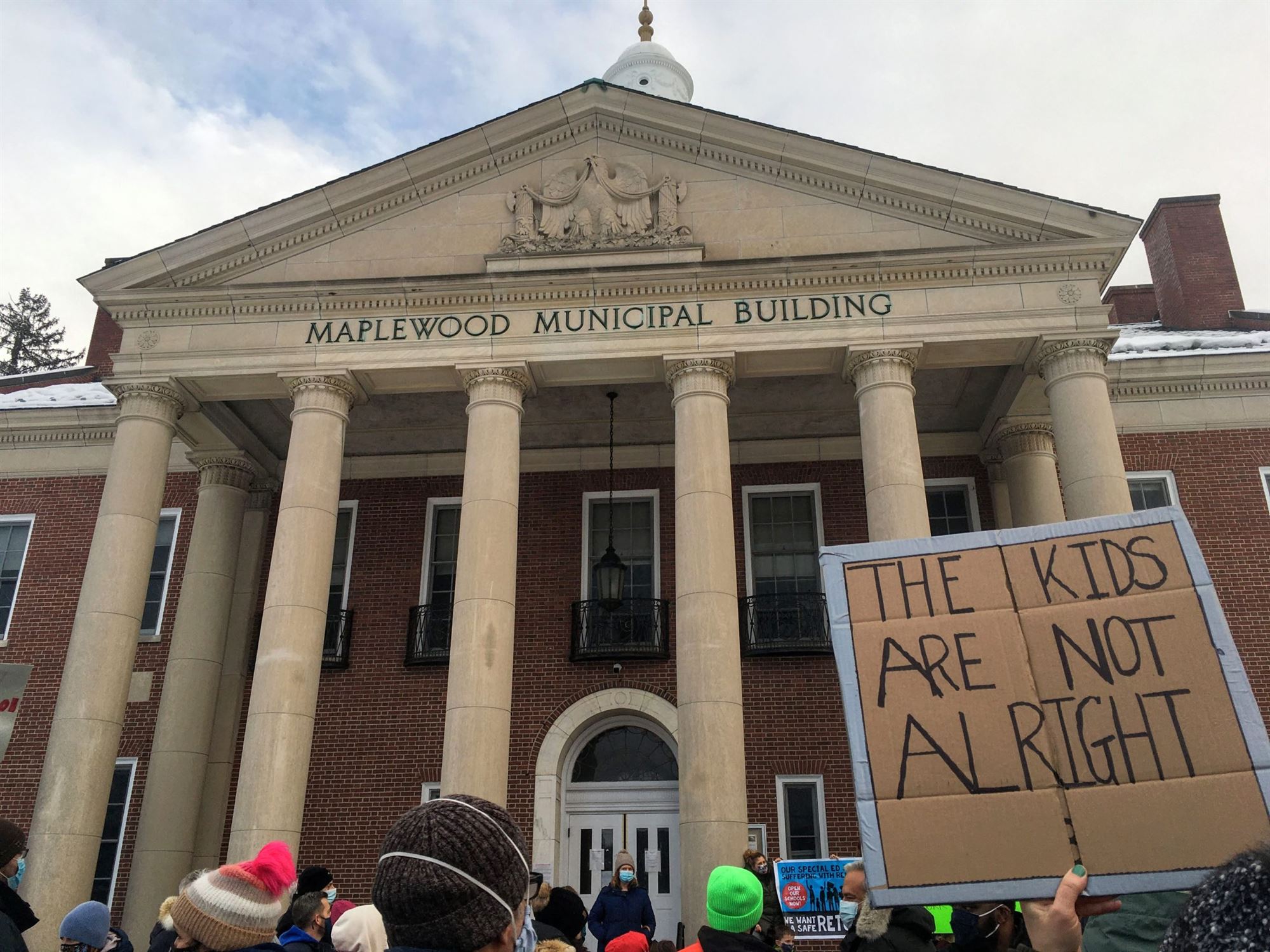 More than 100 Maplewood and South Orange residents attend the SOMA for Safe Return to School rally on Feb. 22, 2021. (Photo by Bruno J. Navarro)

OPINION: In Defense of Jefferson School