Local Hero Award to Be Presented to Bennet Zurofsky 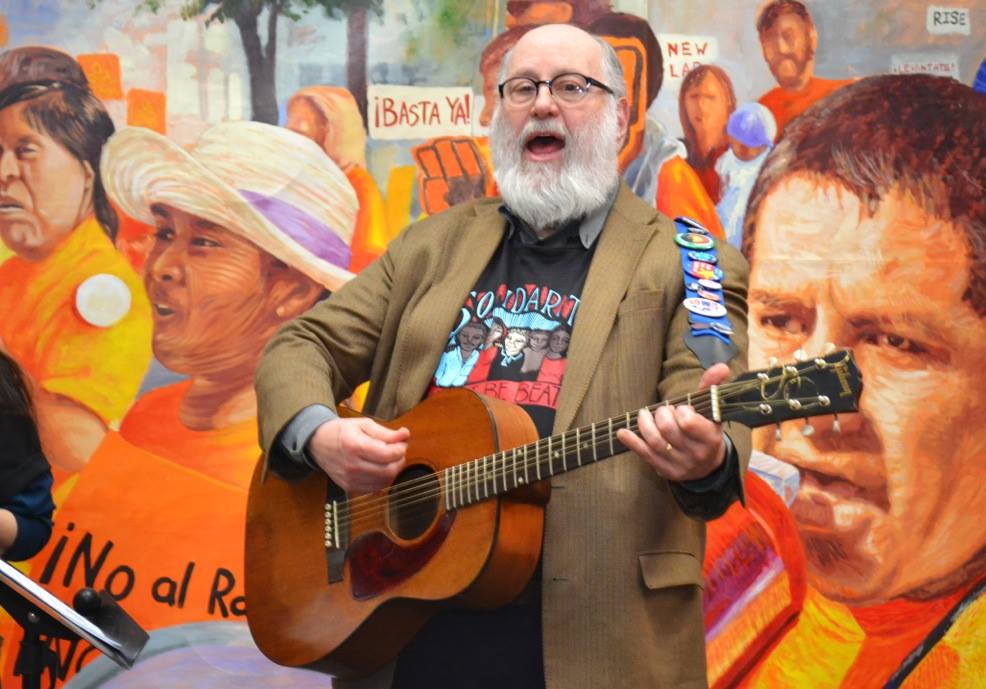 The Social Action Committee of the Ethical Culture Society is presenting its 2018 Local Hero award to Bennet Zurofsky.
Bennet Zurofsky has dedicated his life to advancing the causes of labor, peace and social justice as a lawyer, an activist, and as a musician and director of the Solidarity Singers of the New Jersey State Industrial Union Council.
For thirty-five years, he has practiced law in Newark, devoting himself to unions, employees and the Constitution. Presently a solo practitioner, he was previously the Managing Partner of Reitman Parsonnet, PC, where he entered the private practice of law under the tutelage of the late Sidney Reitman. Over the years, his primary practice has been the representation of many international and local unions. He has also helped hundreds of unrepresented employees in efforts to obtain justice from their employers.
When he is not in his office or in a courtroom, you can frequently find him on a picket line, supporting worker and community struggles, working for peace and responsible government, defending free speech rights, or raising fighting spirits as the Director of the Solidarity Singers of the New Jersey Industrial Union Council.
Mr. Zurofsky also regularly provides pro bono representation and advice in support of activists working for progressive change throughout New Jersey. He is particularly known for assisting demonstrators when they stand their ground and exercise their free speech rights in the face of police hostility. His current pro bono activity includes: serving as General Counsel to the New Jersey Poor Peoples Campaign and providing ongoing advice and representation to many groups that are part of the New Jersey Resistance to the Trump Administration.
As a litigator, some of his notable victories have included: defending the constitutionality of the New Jersey Community Right to Know Act against a challenge brought by the chemical and pharmaceutical industries; obtaining public deportation proceedings for a post 9/11 detainee who the Department of Justice had declared subject to a secret trial; and eliminating sexually discriminatory “obstacle course” testing for municipal police officers. He was also instrumental in ending unconstitutional conditions of confinement in the jails and the juvenile detention center of Newark and Essex County through his service as Special Master for the United States District Court. He has also been Chairman of The New Jersey Supreme Court’s District Ethics Committee for Essex County.
Many also know him as a performing musician since the age of 15. He sings and plays guitar, banjo, mandolin, fiddle and various drums and percussion instruments. Since 1995, he has appeared almost exclusively with the Solidarity Singers of the New Jersey Industrial Union Council, which he directs. For more than a decade, he was a member of the Board of Trustees of Sing Out Corporation, which was founded by Pete Seeger, Woody Guthrie, Paul Robeson and others in 1951, the same year that Zurofsky was born.
He has been honored to serve as the President of several non-profits, including Community Access Unlimited and the Folk Music Society of Northern New Jersey.
Bennet lives in Maplewood with his wife Susan J. Vercheak, who is Assistant General Counsel, Utility Affairs, for Consolidated Edison Company of New York, Inc., and was formerly Chief Deputy Attorney General of the New Jersey Division of Law’s Public Utilities Section. They are the parents of adult twins, Hannah and Sam.
Joining Bennet will be the Solidarity Singers of New Jersey. The Solidarity Singers are “a street chorus, not a concert choir. Our preferred venue is a picket line. We try to lift the spirits of people engaged in struggle and help them to carry on. Only a few of us know how to read music, but we all know which side we’re on.”
Over the past twenty years, the Solidarity Singers have appeared hundreds of times on picket lines, at rallies for labor and other progressive causes and in occasional concert settings, including the annual May Day celebrations at the Botto House/American Labor Museum, commemorations of the hundredth anniversary of Woody Guthrie’s birth and many others.
Together, young and old, we’ll lift our voices in harmony and song. There is no better way to end another year of exploration into who we are and how to live an ethical fulfilling life. Come and sing along. All voices are important! Please join the Ethical Culture Society and the Educational Initiative in honoring labor lawyer, Bennet Zurofsky.
[The Family Education program is going to be included in the sing along.]