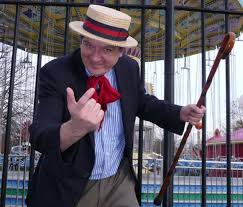 American show business is nearly as old as the nation itself, pre-dating modern mass media such as film, radio, television, the internet and even sound recording by decades. Yet the foundations of all those modern entertainment forms were laid long before the 20th century. In this illustrated talk writer/performer TRAV S. D. will lead you on a guided tour of the strange, colorful (and sometimes problematic) worlds of melodrama, circus, sideshow, medicine shows, minstrel shows, vaudeville, burlesque, cabaret and more, as well as the evolution of the modern landscape – up to and including Zoom talks!

Trav S. D. is best known for his books No Applause: Just Throw Money: The Book That Made Vaudeville Famous (2005) and Chain of Fools: Silent Comedy and Its Legacies from Nickeloeons to Youtube (2013) and for his historical show biz blog Travalanche (Travsd.wordpress.com). He has also written for the NY Times, American Theatre, the Village Voice, Time Out New York, and numerous other publications, and has been featured on BBC, NPR and WNYC radio. A Cinema Studies major at NYU, and an award-winning playwright, he has spoken on pop culture topics from coast to coast at venues ranging from New York’s Museum of Modern Art to the Essanay Silent Film Museum in Niles, CA.