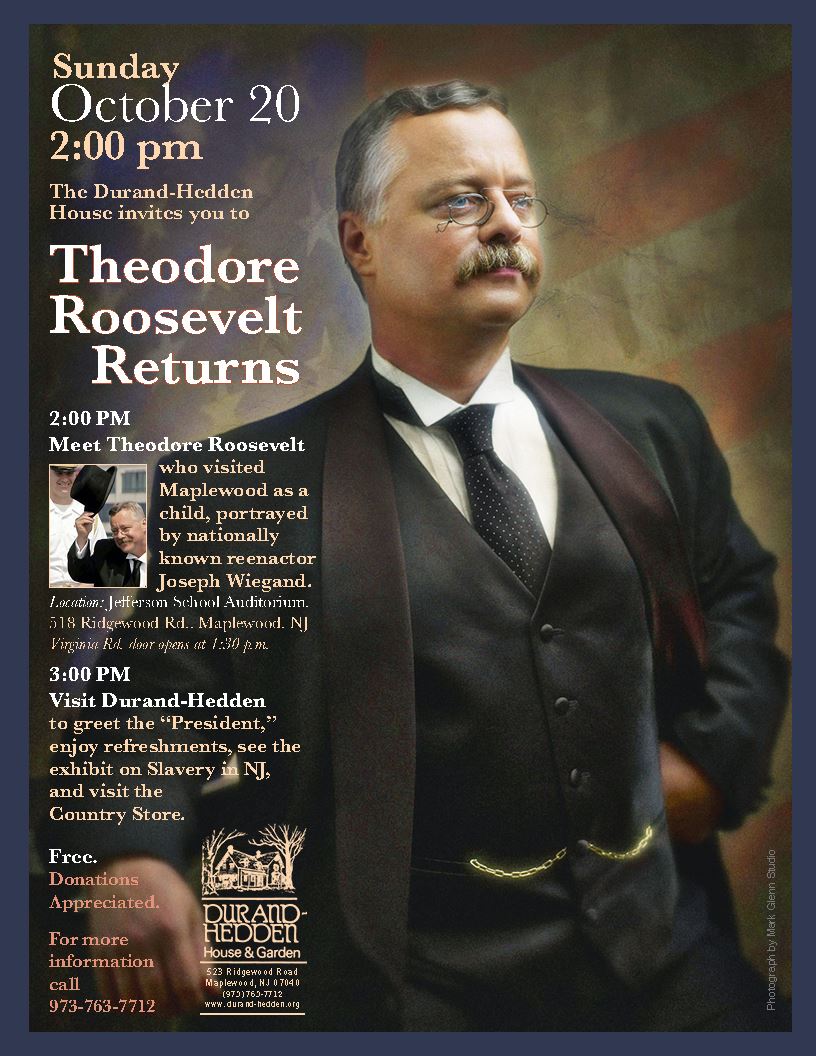 Don’t miss Theodore Roosevelt’s resplendent return to Maplewood on Sunday, October 20, at 2:00 p.m. at Jefferson School sponsored by the Durand-Hedden House. Teddy once roamed the hills and meadows of our town as a boy exploring nature while visiting his Uncle Cornelius’s estate, now the Roosevelt Park section. Expertly played by historic interpreter Joe Wiegand, Theodore Roosevelt will come back to reconnect with Maplewood and vividly share stories of his life, family, and presidency.

Born in NYC in 1858, Roosevelt graduated from Harvard University and was elected the youngest member of the New York State General Assembly. In the years that followed, he became a cattle rancher in the Dakota Territory, served as the president of the Police Commission of New York City, the Assistant Secretary of the U.S. Navy, the Governor of New York, and in 1901, the Vice-President and the President of the U.S., all by the age of 42. A driving force of the Progressive movement, Roosevelt is admired today for championing his “Square Deal” domestic policies, promising the average citizen fairness, breaking of trusts, regulation of railroads, and pure food and drugs. He also made conservation a top priority and established many new national parks, forests, and monuments. Many historians and political scientists consider him one of the five best U.S. presidents.

Joe Wiegand is the nation’s premiere reprisor of Theodore Roosevelt. His performances have been featured at hundreds of historic places associated with TR’s life and legacy, including TR’s birthplace in NYC and his beloved home, Sagamore Hill on L.I., and in film and on television. Joe’s Theodore Roosevelt is based on solid scholarship and delivered with Rooseveltian showmanship.
This entertaining and educational event will take place in the Jefferson School auditorium directly across the street from the Durand-Hedden House. Afterwards, light refreshments will be served at Durand-Hedden and there will be an opportunity to mingle with the exuberant 26th President of the U.S.

The event is free; donations are welcome.